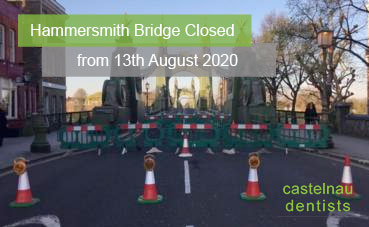 Due to urgent safety concerns, Hammersmith and Fulham council have today announced (13th of August 2020) that Hammersmith bridge will be closed to all members of the public, including pedestrians and cyclists, from 5 pm, following expert technical advice.

What has happened to the Hammersmith bridge?

Inspections carried out as part of the restoration works identified an existing crack has worsened over the past week. Engineers believe this is due to the extreme heat conditions London has experienced in recent days.

"Richmond Council believes that the safety of all residents must be our number one priority.

"However, what was urgent before is now an emergency. A critical piece of London’s infrastructure cannot be allowed to crumble into the Thames, while the Government and London Mayor wrangle over responsibility for the funding.

"With a potential repair bill of £140m, the Government are the only credible funding mechanism. They must now act in the public interest and supply the long-overdue funding to ensure the bridge can be saved."

The bridge and pedestrian under-passes on both sides of the river will remain closed until engineers confirm it is safe to reopen.The Port of London Authority has advised that the northern half of the bridge is closed, but that the southern side of the bridge remains open to recreation and leisure vessels.

Up to 16,000 people cross the bridge every day. Richmond Council is encouraging all residents who plan to use the bridge this evening to look at alternative routes before they start their journey.

Last month Richmond Council called on the Government to urgently commit funding to the restoration project, after outline commitments were made earlier this year.

With future restoration works and a temporary footbridge hanging in the balance, and with this new development seriously impacting the daily lives of thousands of Richmond residents and businesses, a funding agreement is now critical.

Hammersmith Bridge is owned and maintained by Hammersmith & Fulham Council. Due to severe structural issues, the bridge was closed in April 2019. Following a detailed investigation by a team of world-leading specialist engineers, TfL and Hammersmith & Fulham Council agreed on the future requirement of the bridge. The first stage of the restoration programme began, and TfL provided £25 million to pay for it. Early estimates indicate the wider work could cost around £140 million.

For updates also see, London Borough of Richmond upon Thames »

With our convenient location, friendly and highly experienced team and choice of accessible NHS dentistry and expert, high quality dental treatments as well as groud floor surgeries for wheelchair access, flexible opening times and a choice of payment options - visiting the dentist just got a whole lot easier. Register or book an appointment online today.